This article is part of a two-part piece on HVAC. If you haven’t already read part 1, I reccomend you do so before continuing.

Ventilation is responsible for keeping the air in our buildings breathable. Without ventilation, our buildings would fill up with carbon dioxide and other contaminants and become uninhabitable. Ventilation systems replenish oxygen, filter out dust, bacteria, foul smells, smoke, and other pollutants, and prevent interior air from becoming musty and stagnant. Ventilation apparatus fall into two categories — mechanical and natural. 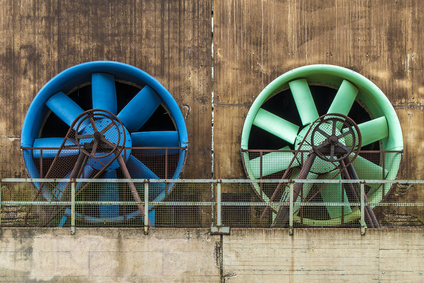 Mechanical ventilation systems involve fans. The most obvious examples would be the ceiling fan in your bedroom, or the exhaust fan in your bathroom. They also come on a larger scale, like the exhaust fans on high rise buildings. No matter the size, the aim is the same — to move CO2, foul smells, and undesirable temperatures out and move fresh air in.

Natural ventilation is the movement of air without the need for a motor, like opening a window. Architects can incorporate vents into structures, and on large buildings they can design them to take advantage of the stack effect (the variation in air buoyancy due to temperature or humidity) to move air in and out of the structure. Well designed natural ventilation systems can save energy over their mechanical counterparts, but they will typically need to be supplemented with a traditional mechanical system.

Broadly speaking, air conditioning refers to any process that makes the interior air of a building or vehicle more comfortable or usable, whether it’s warm air or cold air. However, when people refer to to AC colloquially, they’re generally talking about a central cooling system. A central cooling system is a device that uses a fan to distribute cool air in a vehicle or building. The air can be cooled through evaporation, as in a swamp cooler, or through refrigeration, like in a refrigerated air system.

Evaporative coolers, known more commonly as swamp coolers, work by drawing air through pads soaked in water. As the air passes through the pads, it becomes more moist, which transforms some of its sensible heat into latent heat. Interestingly, a swamp cooler doesn’t change the total heat of the air compared to the outside air. This is why swamp coolers rely on dry exterior air to work properly.

Refrigeration is a process that transports heat. The same principles are at play in your refrigerator as in an air conditioning system. Refrigerant passes through a compressor, where it gains heat and pressure. Then, it passes through a condenser coil, where it loses heat and pressure to the outside world. In your kitchen, your refrigerator displaces the heat inside your fridge into the air of your kitchen. In a home AC unit, heat is displaced from the air inside your home to the air outside.

There you have it — a primer on HVAC. Most people would agree that HVAC is one of the greatest inventions of the modern era. However, many of us are so used to it we take it for granted.

HVAC is a complicated beast. If you need some help, be it a swamp cooler startup, heater service or inspection, or swamp cooler to refrigerated air conversion, give us a call at Polar HVAC.