The Future of the Heat Pump, Part 2

This post is the second of a three part series on the future of the heat pump. If you haven’t already read part 1, I recommend you do before continuing.

How does a heat pump work? (continued)

This type of heat pump – one that uses the ground outside your home as the heat sink – is known as a geothermal heat pump. Depending on the climate, either water or antifreeze is used in the exterior coil. On the interior side, in floor piping can be used to transport the heat, or the system may heat air and use a traditional duct system to disperse the heat. There are also heat pumps that use the outside air as a heat sink. Although they are somewhat less efficient than geothermal heat pumps, they are also far cheaper to install, since they don’t require a field of underground coils. If you have a large body of water nearby, this can also be used as a heat sink, like the river Thames was for the Royal Festival Hall’s coal gas fired beast. However, given the general lack of bodies of water in New Mexico, and the lower initial cost of systems that use the air as their heat sink, you will generally see the most air based systems, followed by geothermal, while water based systems are rare. 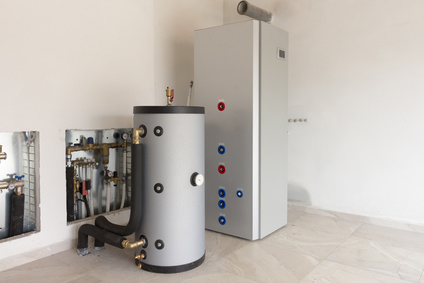 Why are heat pumps more efficient than traditional heat and AC systems?

While the air temperature varies drastically from season to season, the temperature in the ground remains much more constant. You’ve probably noticed this if you’ve ever dug a hole in the summer heat and felt the cool, damp soil under the surface. Likewise, this is why the temperature has to go quite a ways below 32 for quite a while before pipes start to freeze – even at the shallow level they’re buried, the ground provides quite a bit of insulation.

However, even systems that use the outside air as a heat sink are far more efficient than traditional heating and cooling systems.

Check back soon for The Future of the Heat Pump, Part 3